skip to main | skip to sidebar

Flip Wilson Theology - The Devil Made Me Do It! 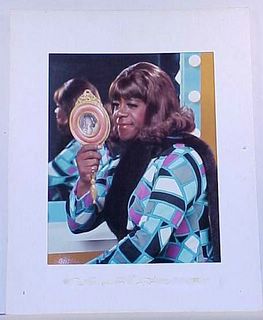 I just had to watch The Flip Wilson Show every week. I can remember begging my parents to let me stay up to watch Flip do Reverend Leroy with the four deacons sitting behind him, always ready with a quick "Amen!" Even as a child my favorite character was the good reverend, but by far the most popular was the brash Geraldine Jones. Flip based this character on an old girlfriend and transformed himself into Geraldine by donning a dress, some strategically placed padding and working his voice into a falsetto which still sounded a bit husky for a female. But the audiences would go crazy for Geraldine and her famous line. This catch phrase was so good it made the t-shirts in the 60's. "The devil made me do it," was the cry. And the audience would howl it's approval. After all, what a great excuse! It's not my fault. I had to do it. The devil made me do it.

Of course Geraldine didn't invent it. It's not only a classic TV catch phrase, it's also a classic excuse. That one goes all the way back to the first recorded game of "Pass the Buck" back in Genesis. That story has almost comic undertones to it.

"Adam, why did you eat that when I told you not to?"

I wouldn't have been shocked to see the snake try to point a finger, er, head at somebody else instead of taking responsibility. That's our nature! Adam's sin nature, just a few minutes old, wanted to pass the buck. Same with the woman. The attempted avoidance of responsibility is almost a reflex these days after being ingrained in our nature back in the Garden.

"The devil made me do it" is a symptom of our sinfulness. We simply don't like it when it's our fault. We do not like to admit failure. Well, maybe you do, but I sure don't. Who better to blame it on than the father of lies, our great adversary, the roaring lion looking for whom he may devour?

I'm not one to sell Satan short. I guess you could say that I'll give the devil his due. But the devil cannot make you do anything against your will. The devil or his demons cannot inhabit the same body which is infilled by the Holy Spirit. Like Jesus said, how can a robber rob the house of a strong man? He must first tie up the strong man. And you and I both know no demon can tie up the Holy Spirit. So all this business about having the demon of lust inside you or the demon of alcohol or any other demon for that matter is all just screaming, "The devil made me do it!" But this time, the devil isn't guilty.

I don't know about you, but I don't need to devil to make me sin. I do it just fine on my own, thank you. Now he may talk and he may tempt and he may entice and he may try to shout out my reasons for obedience to God, but he does not and can not make me sin. If I sin, or rather when I sin, it's my own fault and I bear the responsibility. I can't go blaming the prince of this world when I'm the one who cheats or lies or robs or gets drunk or buys an expensive new dress I can't afford. The devil didn't make me do it. I rebelled against God willingly, the same way Adam and Eve chowed down on forbidden fruit of their own volition.

Being tempted does not equal being forced. We may be weak in our human nature, but with Christ in us we have the strength to resist. Thank God that He doesn't leave me on my own to try to forage against the wiles of the evil one. But even if He would leave me alone, it would still be me choosing to chew the fruit. I cannot pass the blame to peer pressure or a desire for more money or a friend who drags me down or the devil himself. It's up to me.

So Geraldine is sadly mistaken. And so is anyone who continues to use the same tired excuse, "the devil made me do it." The fault lies with the sinner. Yet if that sinner has Christ, the penalty for that sin has been taken by the Savior.

For more Flip Wilson theology, see Don't fight the feeling and What you see is what you get.

rev-ed
I'm married with three kids, not to mention three jobs. My calling is serving as pastor at a small country church. I also work at a small-town newspaper and do some government work on the side. Needless to say, I'm a busy guy, but you can contact me at rev-ed at verizon.net